Guest Post – Giving Back to My Mum: A Weekend in Poland

My parents are my role models. I grew up spending summers travelling around the UK in a caravan. They encouraged me to travel and as I got older and could pay for my own trips, our family vacations got bigger and went further afield. I now like to ‘repay’ them by helping them tick items off their bucket lists. They support and help me achieve my dreams, now it’s my turn to give back!

A recent trip took my Mum and I to Poland. Being from the UK, in school we were taught a lot about the world wars. My Mum’s Grandad was even a prisoner of war in Germany. She has always had an interest in the history and wanted to visit Auschwitz. However, Poland was a country slightly outside of her comfort zone. The main languages we learn in the UK are German, French, and Spanish. She was worried she would get lost in a destination with a completely unfamiliar language. I was more than happy to research into how we could visit!

Altogether we spent 48 hours in Krakow. We got the train from the airport to Krakow Central. Day 1 was spent exploring Krakow’s Old Town, sharing our love of photography and eating food from the local markets. In the evening we took part in an Escape Room challenge. We were locked in a room and had to solve clues and puzzles to escape within one hour! It was a great test of our relationship and we worked amazingly well as a team. We both had different strengths which together helped us to succeed! We were both so proud of each other for what we had managed to achieve!

The majority of our second day was spent on a tour of Auschwitz. It was nice being able to ask my Mum questions and have her share her knowledge with me. I think when it comes to parents and grandparents, it’s important to ask as many questions and learn about their life and interests while we still can, it’s a precious time we have with them that we shouldn’t take for granted!

The trip was a huge success. I have always travelled with either my Mum, Dad, and sister as a family or both parents together. This was the first time I had actually been away with just my Mum. It was a great mother-daughter bonding trip. It was a destination I probably wouldn’t have visited off my own back and as I mentioned previously, she wouldn’t have visited without my help. It was a win-win for both of us; we both discovered a new city which we loved.

When we’re children, we grow up learning from our parents. While we were away, I tried to explain to my Mum how I get around in a foreign city and that 95% of the time you can get by using the English language. It felt good being able to teach her something in return and I think it encouraged her to step out of her comfort zone in the future! 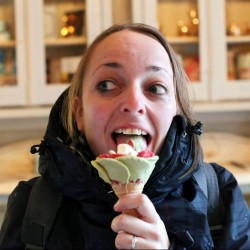 Soon to be British Expat, emigrating to the American Midwest. Lover of travel, adrenaline, camper vans, and ice cream!